Just in case you don´t know what a MUTRON Octave Divider sounds like, listen to this intro:

346,84 including German VAT for customers from inside the EU

Are you one of those musicians who searched for a MUTRON Octave Divider on eBay™ for years and years, and all you found were listings of old, beaten up Octave Dividers, offered for prices you could have bought a used car for? 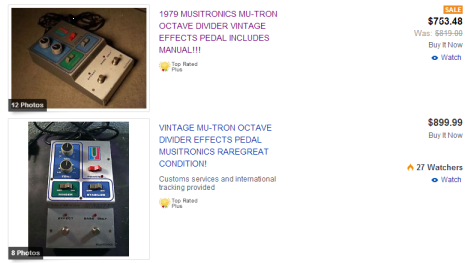 And because I live outside of the United States, the situation was even worse.

A long time ago, most MUTRON Octave Dividers were sold only in the United States.

They ran off the 120V AC wall sockets (we have 230V in my country) and shipping and import taxes would have eaten me alive if I had decided to buy one.

The company MUSITRONICS® closed production decades ago, so there was no hope that they would ever build their Octave Dividers again.

Years went by, and I started to see some potential use for all the knowledge I had accumulated during my years of studying electronics.

Finally, I was able to understand this mysterious circuit. I wondered if I could build one unit for my personal use.

I bought the original service manuals and was on my way to Octave Divider heaven.

It has been a long, long road.

Modern technology made reaching all these goals possible.

The supply issue is handled by a state of the art power supply IC which can produce negative voltage from a single positive supply (such as the 9V DC we are used to). 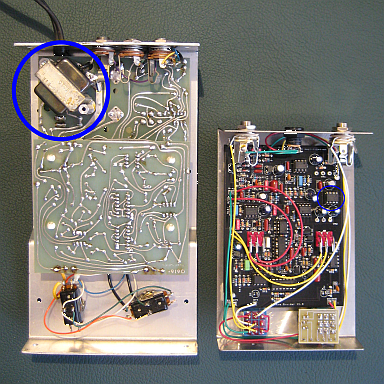 Compare the size of the power transformer to the small chip in our version. The chip provides the unit with the same positive + negative voltage as the transformer does. Modern times….

There is no power transformer inside the unit anymore. The small power supply IC handles that.

However, there is no safety ground wire connected to the pedals enclosure, which would be fine if the life wires were properly isolated inside the unit, but they are not.

It can be dangerous to play over such units since your safety depends on the safety ground, which might come from your amplifier, depending on which one you use.

In general, the older units were not necessarily dangerous, but they were risky.

Did I mention that the audio signal path remains the same ? 100% the same ? I think I did….

A double sided PC-board is usually more reliable. The components are not soldered to one side of the board only, but to both sides of the board. The resulting electrical and mechanical connection is much more stable over time.

Parts replacement can become a hassle though. To make replacements easier, if necessary, we installed all OPVs and other ICs on sockets.

As you might know, the MUTRON Octave Divider contains a quite complex circuit. There are dozens of ICs and transistors build into it, not to mention hundreds of resisters, diodes, and capacitors. The circuit does a really fine job of tracking the original tone played. It tracks the played frequency of the tone and adds a tone an octave below the original tone.

One might think this is easy to do, but it is not. The guitar’s signal is quite complex. It is not just a single frequency, but contains a mixture of overtones on top of the base frequency of the original tone.

The content of that frequency mixture varies between the string you play the tone on, the attack you play with, the fret/ neck position, etc. 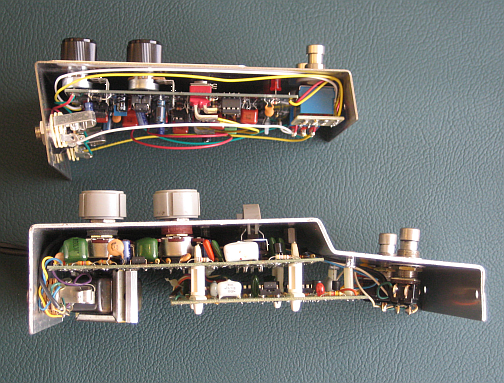 The MUTRON with its two PC-boards and our unit with the single PC-board.

The engineers at MUSITRONICS® did an outstanding job of developing a circuit that can handle all of this quite well, especially for being invented in the 1970s.

Modern octave dividers often use short-cut solutions which track no good at all. Or, in our digital age, they sample the guitar signal and use some sort of CPU and software to calculate the note played and add the lower octave.

Yeah, the tracking might be close to perfect but it really cuts off a lot of the fun and craziness this unit brings into play.

The thing with the Octave Divider is that is tracks very well but NOT in a 100% perfect way.

As soon as you start to play double stops or bendings, things get really wild. The lower octave jumps from one tone to another and all kinds of crazy stuff starts to happen.

It takes some time to get used to it, but once you do, the Divider is really fun to play with. It is its own kind of instrument.

346,84 including  German VAT for customers from inside the EU

RINGER and BASS ONLY

The Octave Divider is not just an octave divider, but also a GREEN RINGER. 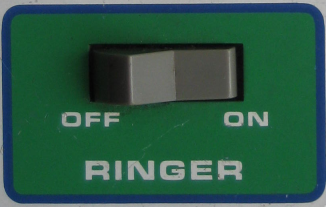 The result is a fat , wild guitar tone !

The MUTRON Octave Divider had this RINGER built in, and the player could switch it IN or OUT with a paddle switch above the two foot switches. If you wanted to play the fat lower octave sound and then add the RINGER sound on top of it, for instance, you would have to bow down to the Octave Divider and use your finger to hit the paddle switch, or you could try to activate the RINGER with the tip of your shoe.

Since the paddle switch lever is made of plastic, it would be a matter of time until you would break it. Replacement parts can sometimes be found on the internet for 60 USD or so.

There is also a BASS ONLY feature, which allows you to foot switch IN the lower octave sound without the original signal. The BASS ONLY can be activated with the second foot switch on the pedal.

I think the plastic paddle switch which that was used to activate the RINGER in the original unit is not the best idea. I wanted to be able to hit a foot switch and activate the Ringer on top of the original + lower octave sound.

That is why I decided to give the user the choice ,if he wants to use the second foot switch to activate the Bass Only OR the Ringer.

There is a switch inside of our version of the Octave Divider. Users have the option to use the second foot switch for switching to the BASS ONLY mode or assigning the foot switch to the RINGER. 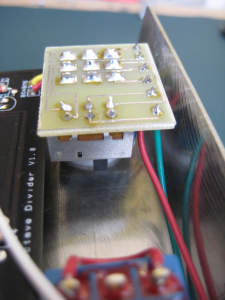 Switch inside the Octave Divider for foot switch assignment.

The good news is you do not have to open the pedal to use this switch. There is a cut out in the bottom plate of the Octave Divider that allows you to use the switch with your index finger from the outside. 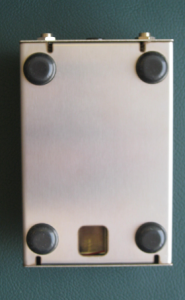 Cut out at the bottom of the Octave Divider.

The usual input impedance of a tube amplifier is 1000k ohms. The MUTRON has just about one third of that, which dampens your guitar pickups resonance peak quite a bit. 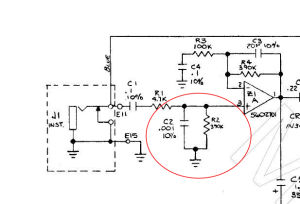 The worst thing is the 1nF capacitor to ground. It will bleed treble to ground in the
same manner as if you were to roll down your tone pot
on your guitar. All of this is not very desirable. Therefore, I installed a true bypass on my version of the Octave Divider and consider the problem to be solved.

I am kind of a lazy guy. I would never:

to then find out that the sound of my version of the Octave Divider is different from the original.

There is, however, one exception:

Why ? Because I found no use for it. The AUX out would send some sort of original guitar signal to another amplifier, for example. That signal is far from original, since it would go through several stages inside the Octave Divider before leaving the pedal.

In this day and age, there are far better ways to split a guitar signal. If you really have use for this function on the Divider and cannot do without it, there is still a modification, which consists of an additional 1/4″ socket and a wire only.

Most parts used in the Octave Divider are still available today — switches, resisters, capacitors, pots, and sockets have not changed much since the 1970s. 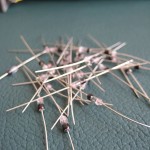 There are some parts, though, that are not available anymore or that are outdated and therefore hard to find.

One example is the Germanium diode 1N34A. There is no chance to buy them from a current supplier.

I bought a large NOS (new old stock) of it. 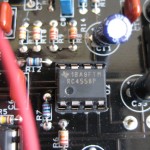 The majority of the OPVs used in the Octave Divider are 4558 types. They are quite outdated from a technical point of view. Nevertheless, I used them.

It sounds just as great as the vintage units did.

It is a reliable.

It is new, and it comes with a full warranty and some extra features:

The first production batch contained eleven units. There are only nine units left (as of 29.07.2014)!

346,84including German VAT for customers from inside the EU

Disclaimer: RITTER Amplification is not affiliated with MUSITRONICS® , Fender® , Marshall®  or any other cooperation.