The day has come. The ÜBER JTM45 will be brought to life.

Readers of the previous articles on the ÜBER JTM45 may ask :

What happened to this amplifier ?

Did it explode when you first turned on ; or why did it take him so long to write something else about this amplifier ?

There are two answers.

First, I wanted to give the JTM45 some time to prove its reliability in a real situation. I wouldn’t want to write how wonderful everything is in theory, when in practice it turns out the amp is not running as intended.

Second, lack of time. I’ve been working on a new 100 Plexi which is even more complex than the ÜBER JTM45. Also, my work for KPA-Solutions ist taking more time than expected….

By the way: Here is our new web shop for the Camplifier (ad on power amplifier modules for the Kemper Profiling Amplifier).

If you are interested in solutions for the Kemper Profiling Amplifier – please take a look.

I had checked the whole wiring of the amp again and again. It must have been at least three times.

The commissioning of the JTM45 was a breeze. It was almost suspicious.

After the first switch ON I immediately thought: thoroughly planning the amplifier’s grounding layout and the decoupling of each tube stages had been truly worth it.

I have built quite a large number of JM45’s, but I have never heard a quieter one. No hum. No hum at all.

The low-noise resistors I selected for the input circuit of the amp have a positive impact. Sure, the bright channel still generates some white noise, but much less than when using carbon composition resistors or even carbon film resistors.

For the almost non-existent background noises I will give myself an A :-).

I plugged in the guitar cord, and the sound of the first notes confirmed my wildest hopes:

The amp sounds much tidier and more clearly defined than its peers.

The reason for this is clear. All tube stages of the amplifier are decoupled from each other, the grounding layout is just perfect, and I used only the finest components available.

What does this all mean?

In a standard JTM45, almost all tube stages depend on one voltage source. You might think of this like many small electric motors running on only one battery.

If a tube pulls current or starts to behave a little oddly, all the other tube stage will be affected by it.

The bad manners of that single tube will influence the voltage supply for all other tube stages too. Especially during signal peaks, the sound starts to get mushy, queasy and undefined.

Not so in the ÜBER  JTM45.  In it, each tube stage has its own voltage buffer and can work cleanly and independently.

Pure luxury for my ears.

Again, another A for me !

Let’s test the ÜBER JTM45 against a conventional JTM45: 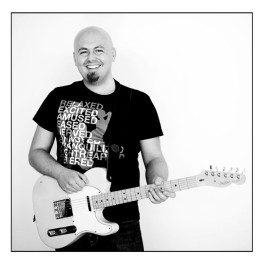 Of course I’m biased as far as this guitar amplifier is concerned. We have already spent many hours together.

So I made an appointment with Christian Konrad in his rehearsal room. Christian played on each of my previous amplifier sound samples on ritteramps.com. He is an absolute guitar pro.

We wanted to compare my JTM45 against the one he owns. His JTM is also a hand-wired amp, made by a well-known tube amp builder from Germany. The amp has a very decent build quality.

The test environment was his rehearsal room, Christian’s guitar, and his 4 × 12 ” speaker cabinet.

We spent an afternoon playing both amplifiers and comparing them.

The positive impressions I got in my workshop were immediately confirmed here.

We both agreed on this. Christian found the Power Scaling function ” … much more useful than the master volume on my JTM45 ” (which is a PPIMV, by the way).

I asked him to dial in a nice, dynamic, and crunchy sound he liked without concern about the overall volume.

“Imagine, you’re playing in a small pub and want to play with this sound.” , I said. “The bar owner doesn’t want his glasses to shatter on the bar and shouts in your direction: “The guitar is too loud!”

This is exactly the situation power scaling is made for.”

I then used the “limit” and the “power” knob on the ÜBER JTM45 and tried to retain the original Christian sound. Just quieter. 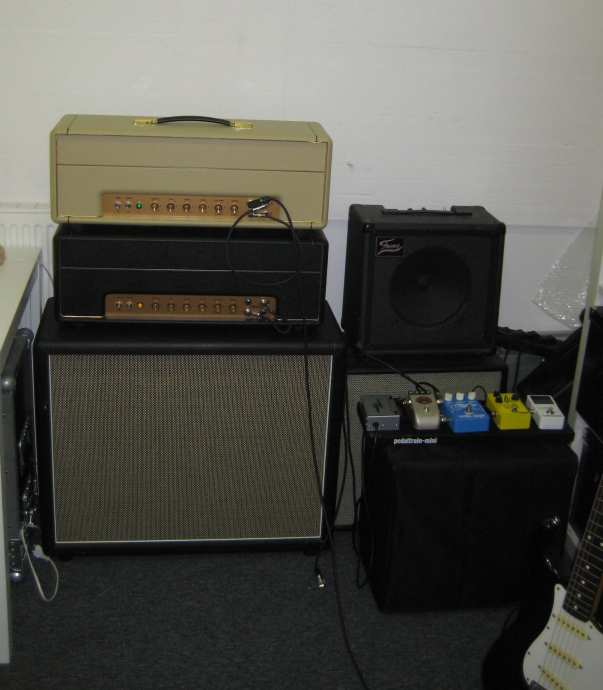 Back in the workshop, I tested the amp and its power scaling extensively.

I will write an extra report on this later. There, I will try to explain the Power Scaling function and technology in great detail.

Meanwhile, the ÜBER JTM45 found its home with his new owner Jan. Jan is delighted by his new JTM45. He has not taken the extremely long waiting time for this amp badly. Thank you, Jan!

Finally, a picture of the amplifier in its new home. You see, it is in the most distinguished company

Overall, I did spend about 1.5weeks planning the ÜBER JTM45, assembling it and putting it into operation. The result can be seen and heard and is very satisfying.

If I should build another exclusive JTM45 like this one, I would probably build everything exactly the same. I would use these components, but I would think twice about the power scaling.

I personally could do without the power scaling. Not because it does not work.

On the contrary, it does EXACTLY what it should do. However, personally I could get the effect of a quieter , but slightly distorted amp with distortion pedals before the amp well enough for the average live situation. In the studio, the volume usually does not bother me at all. I just turn up the amp until it sounds good.

The appeal of the Power Scaling lies in the fact that the sound is formed (even at low volumes) by the tube amp itself. The pure doctrine;  so to speak  . For hardcore purists, that is certainly an argument.

I’m a bit more pragmatic. But hey – every guitarist is different.

Overall, building this amp has been very interesting and educational for me.

Click here for Part I , Part II, Part III and Part IV of the ÜBER JTM45 report (these links will get active soon).